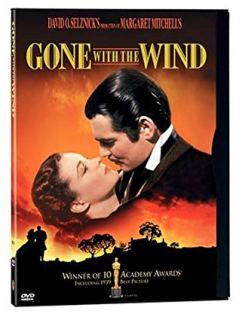 One of the first books I remember making a big personal impact on me was “Gone With the Wind.”  I’m re-reading it for like the thousandth time right now.  I wore out two paperback copies of it before I moved on to buying a digital copy so now I’ll never wear it out!

I think the thing that made such an impression on me was that the characters were SO well drawn that you could really feel their thoughts and emotions.  And the fact that the protagonist was a woman who was smart and independent also made a big impression on me – although I always wanted to be Melanie more than I wanted to be Scarlett.

The movie was coincidentally recommended to me by my TV OnDemand this weekend – which makes you wonder if the cable people are spying on me – so I also watched the movie for like the 100th time this weekend.  As a result, today I’m presenting to you some fun facts about the movie of “Gone With the Wind.”

Check out your OnDemand – maybe “Gone With the Wind” is your recommendations too?  You certainly can’t go wrong watching it – it is a fabulous movie!