Last week I wrote about Alexander Hamilton having a to-do list that was Non-Stop.  Well I think Thomas Jefferson was probably right up there with him.  Jefferson was Hamilton’s largest political rival as well as a prolific writer, diplomat, statesman and all around renaissance man.  Did you know that in addition to being the principle author of the Declaration of Independence he was also a noted architect, economist, paleontologist, astronomer and musician?  Really what couldn’t he do? 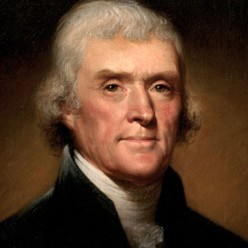 Want to know more about Thomas Jefferson?  Check out these sources:

Famous quote from Thomas Jefferson?  Who can pick just one from this guy?  How about a list of them?

The tree of liberty must be refreshed from time to time with the blood of patriots and tyrants.
Honesty is the first chapter in the book of wisdom.
In matters of style, swim with the current; in matters of principle, stand like a rock.
Indeed, I tremble for my country when I reflect that God is just: that his justice cannot sleep forever.
I cannot live without books.
I’m a great believer in luck, and I find the harder I work the more I have of it.
Nothing can stop the man with the right mental attitude from achieving his goal; nothing on earth can help the man with the wrong mental attitude.
Never spend your money before you have it.
I predict future happiness for Americans if they can prevent the government from wasting the labors of the people under the pretense of taking care of them.
Loading Comments...
Comment
×