Earlier this week we commemorated the 17th anniversary of the 9/11 attacks.  I lived and worked in New York City for many years so the attacks had a special resonance for me.  Any time someone came to visit me when I lived in NYC, I made sure to take them to the top of the the World Trade Center.  The view was amazing – and the elevator ride was an experience all by itself.

When the Twin Towers were attacked the first time in 1993, I was working in mid-town Manhattan – and I remember my Dad calling me at work and just blurting out “Are you OK?”  I had no idea what was going on just a couple of miles from me when he called.  And I commuted on the PATH train through the World Trade Center from New Jersey for the last couple of years that I worked in NYC.  So the Twin Towers had special meaning for me.

In 2001, I was living in the Chicago suburbs.  I had gotten up early and taken my car to the dealership for service.  I was in the dealership shuttle on my way to work when news of the first plane impacting the World Trade Center came over the car radio.  I got out my cell phone and called a friend who I knew had a view of the Trade Center from his office.  I was talking with him when we heard the roar of the second plan and he cried out as it hit the second tower.  I remember being numb for the rest of the ride to work.

I had a tiny black & white TV/Radio at my desk at work and the rest of that day, I had people standing in my cube watching the news of the tragedy.  It was awful and all I could think of was the families and friends of friends that I knew were likely in the building that morning.  My heart still goes out to the victims’ families, the first responders and the survivors of the attacks.  God bless them all as we remember. 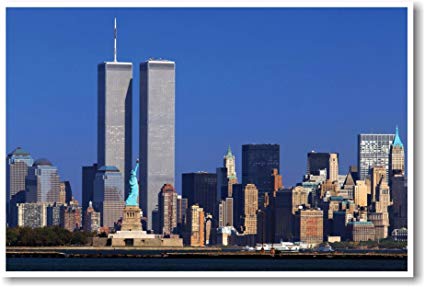 I like to learn something new every day. Something about a short attention span maybe? But it keeps me engaged and growing - and who doesn't want that? View all posts by Learn-or-Do