This is a magical time of the year – how about we all try doing some magic?  The videos still won’t embed – but click the link below and amaze your friends!

I bought my first Christmas tree over 20 years ago – it’s a 4′ pencil tree that is currently decorated and waitng for it’s timer to go off so it will light up my living room.    I love my tree – this year it has 300 white lights (I’m a sucker for white lights), gold and white ribbon and gold bells.  And of course my Santa and Mrs. Santa bells.

In college, my roommates and I made our Christmas tree one year – it was a huge paper cone we taped to the wall and decorated.  I still laugh thinking about that “tree”!

The first tree at Rockefeller Center in New York was put up by construction workers in 1931 – and decorated with tin cans, paper garland and cranberries.  Since then, the tree has gotten bigger but the tradition remains.

Do you ever wonder why we have the tradition of Christmas trees?  Well wonder no more – click on these links and learn about the history of the Christmas tree!

I have no throwback today.  But I do have a random list generator!  This is kind of fun – take a peek at randomlists.com.  If you’ve got some time on your hands you don’t know what to do with, you can generate all kinds of random lists here – than make it a game with yourself to associate them.

And I’m betting something on one of your random lists will spark a throwback memory – making this post full circle.  You’re welcome!

Remember – flu and what we call stomach flu are not the same thing.  I know we grew up calling stomach upsets the flu, but actual flu (or influenza) is really an upper respiratory infection.

I don’t want to jinx it, but right now actual flu cases are fairly minimal throughout most of the U.S. – how do I know you say???  Check out the CDC Flu tracker!

Click that link and you’ll be amazed at all the information you can find on the flu.  Maybe the incidence is down because the flu shot is working well so far this season?  Who knows – just knock on wood that you don’t catch it!

A stomach bug has been going around my department at work – and yesterday was my turn.  I came home from work early and took it easy all afternoon.  I also employed some of my favorite home remedies to cure an upset stomach.

If you’re past napping or Coke as a cure for an upset stomach, my Dad swore by stuff called Emetrol – there are store versions of it at Walmart or Walgreens.  If you’re sick at your stomach and home remedies don’t work, I can almost guarantee Emetrol will.  Next time you’re feeling nauseated, give it a try! 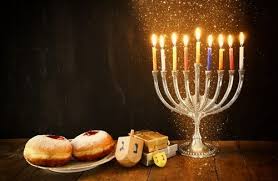 Yesterday was the first day of Hanukah.  Chances are you’ve heard of Hanukah (or the Festival of Lights) and you might know it lasts for 8 days – but do you know the story?  Chances are you don’t and here’s a fun fact – the story isn’t included in the Torah because the events that inspired the holiday occurred after it was written. It is, however, mentioned in the New Testament, in which Jesus attends a “Feast of Dedication.”

So here’s the full story according to History.com:

Around 200 B.C., Judea—also known as the Land of Israel—came under the control of Antiochus III, the Seleucid king of Syria, who allowed the Jews who lived there to continue practicing their religion. His son, Antiochus IV Epiphanes, proved less benevolent: Ancient sources recount that he outlawed the Jewish religion and ordered the Jews to worship Greek gods. In 168 B.C., his soldiers descended upon Jerusalem, massacring thousands of people and desecrating the city’s holy Second Temple by erecting an altar to Zeus and sacrificing pigs within its sacred walls.

Led by the Jewish priest Mattathias and his five sons, a large-scale rebellion broke out against Antiochus and the Seleucid monarchy. When Matthathias died in 166 B.C., his son Judah, known as Judah Maccabee (“the Hammer”), took the helm; within two years the Jews had successfully driven the Syrians out of Jerusalem, relying largely on guerilla warfare tactics. Judah called on his followers to cleanse the Second Temple, rebuild its altar and light its menorah—the gold candelabrum whose seven branches represented knowledge and creation and were meant to be kept burning every night.

According to the Talmud, one of Judaism’s most central texts, Judah Maccabee and the other Jews who took part in the rededication of the Second Temple witnessed what they believed to be a miracle. Even though there was only enough untainted olive oil to keep the menorah’s candles burning for a single day, the flames continued flickering for eight nights, leaving them time to find a fresh supply. This wondrous event inspired the Jewish sages to proclaim a yearly eight-day festival. (The first Book of the Maccabees tells another version of the story, describing an eight-day celebration that followed the rededication but making no reference to the miracle of the oil.)

Want to know more about the history of Hanukah and the traditions associated with it?  Check out these links:

To all my Jewish friends – Happy Hanukah!!!

I LOVED this!  Happy weekend all!

…is new again.  On Cyber Monday, I did a little surfing on Amazon.  Admit it – you probably did too so don’t judge me!  I’m always amazed at the things Amazon suggests to you.  I’m not telling you what I was shopping for – I don’t want to ruin any surprises – but Amazon suggested this to me:

That’s right – plug this into your cell phone and it’s just like having the phone I grew up with in your hand again!  I’m conflicted – on one hand, I love the nostalgia but on the other seriously?  Who’s going to carry that thing around with them?  It won’t fit in your pocket, that’s for sure!

So enjoy this weird throwback to an earlier time in phones – maybe it’s a perfect gift for someone on your Christmas list!

I recently read an article that box jumps are the most underrated exercise at the gym.  I don’t necessarily disagree – they give you both strength and cardio benefits.  Here’s the link to the article – Shape Magazine.

But while I agree, my personal favorite exercises these days are squats and planks.  If you carry your weight in your rear end and stomach, these moves will help you tone up – and they just make me feel good.  I used to have knee pain from an injury in high school I didn’t take care of – and squats strengthened my muscles to the point that the knee pain is only noticeable now in cold, damp weather.

Planks are harder to feel good about – they are SO much harder than they look!  But you can’t deny the good they do for your abdominal muscles.  And they’ll help you improve your posture as well – a great added benefit as we age.

Want to do some squats and planks?  Do them right – follow the forms in these links:

Do you have a go-to exercise you like?  Tell me about it in the comments!